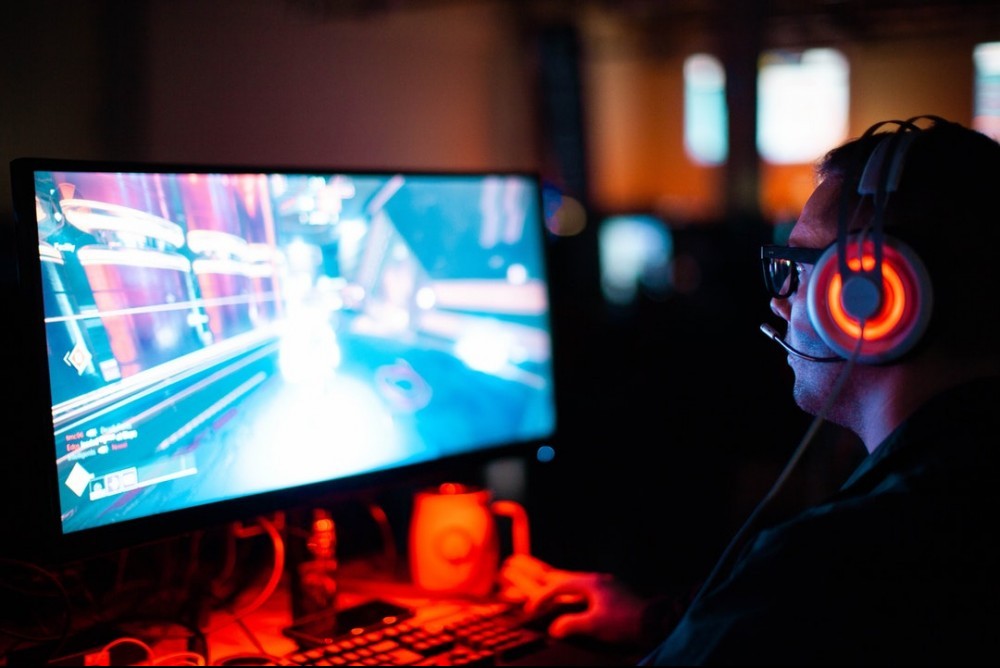 This is a comprehensive Gaming Jobs Online review.

In this review I’ll be sharing:

If you’re interested in a legit way to make money online? I’d highly recommend taking a look at the online training platform that taught me how to create a professional looking website, market it with organic rankings and PPC, and how to monetize the website.

How Does Gaming Jobs Online Work?

Gaming Jobs Online is a website that helps you with finding jobs in the game testing business. According to Game Jobs Online, they’ll connect you with large companies that are looking for game testers. You’ll get paid online have access to new unreleased games and you’ll get invited to gaming conferences.

This morning I just finished my mommy jobs online review and I noticed that a lot of these websites that end with jobsonline.com are pretty shady.

I’ve seen 3 of them till now but that isn’t a large enough sample size to actually make that conclusion so I looked for a few more and found this one:

Making money online gaming is to me, one of the coolest sources of income you can have so it’ll kind of break my heart if this thing is fake.

Unlike some of the other jobsonline.com websites, I’ve reviewed this one looked pretty decent. There are a lot of things that made me believe that this thing could actually be legit but before I could say that with 100% certainty there were a few things I needed to check.

Picture of the main page of Gaming Jobs Online

On the landing page, they have a sales video on which a spokesperson ( Who is absolutely gorgeous btw) and she talks about the features and benefits of joining Gaming Jobs Online.

Next to the video they also say you’ll get invited to game conferences, exhibits, and conventions such as E3, Japan Game expo and more.

I tried doing a reverse image search for the girl in the video ( for actual researching purposes. Get your mind out of the gutter haha.) but nothing came out.

Initially, the website looked pretty good but then I found some very alarming red flags.

Red Flag #1: Disclaimer — The typical purchaser does not make any money using this system

When you scroll down to the footer most of the time there will be disclaimers more than often they can tell you immediately if something is a scam or not. Even scammers try to make sure they aren’t liable for legal consequences often.

So let’s look at the disclaimer of Gaming Jobs Online.

According to this disclaimer, the typical purchaser does not make any money using this system. If it’s an affiliate marketing product I could understand putting this in your disclaimer because there a lot of factors that aren’t in the hands of the people making the product.

I can’t imagine it being like that with video game testing. Sure there might be a few that aren’t doing it properly but most people that purchase it won’t make money is strange.

Red Flag #2: Disclaimer —  They are not associated, affiliated, endorsed, or sponsored by Google

In the sales video, they claim to be the connection between big companies and the purchasers of this product which give you special access. If that’s true how come in the footer they say they aren’t associated with companies such as Google and Amazon.

To make it even more suspicious on the website itself they are in the very least associated with Amazon and Google. 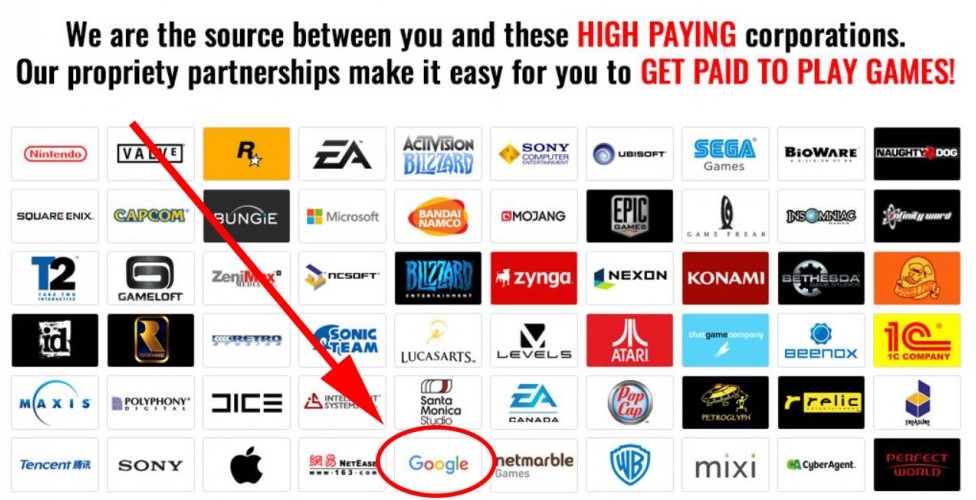 When you scroll down there’s some copy talking about benefits and how much you can earn when you work with Gaming Jobs Online. These numbers absolutely make no sense.

$75 dollars for filling in surveys, $150 an hour for participating in focus groups, previewing movies and game trailers for up to $25 an hour. I can’t imagine this being true and they’re not trending on the internet right now.

The first testimonial you see when you scroll down is that of Chris Page he’s the editor in chief of Shoot Em Up Gaming magazine. He’s recommending Gaming Jobs Online to all video gamers looking for quick cash.

I looked up Shoot Em’ Up Gaming Magazine and it doesn’t exist. The only thing that came close to it in a Google search was Retro Gaming Magazine where there was no mention of Chris Page. The same went for LinkedIn, Facebook, and Instagram. 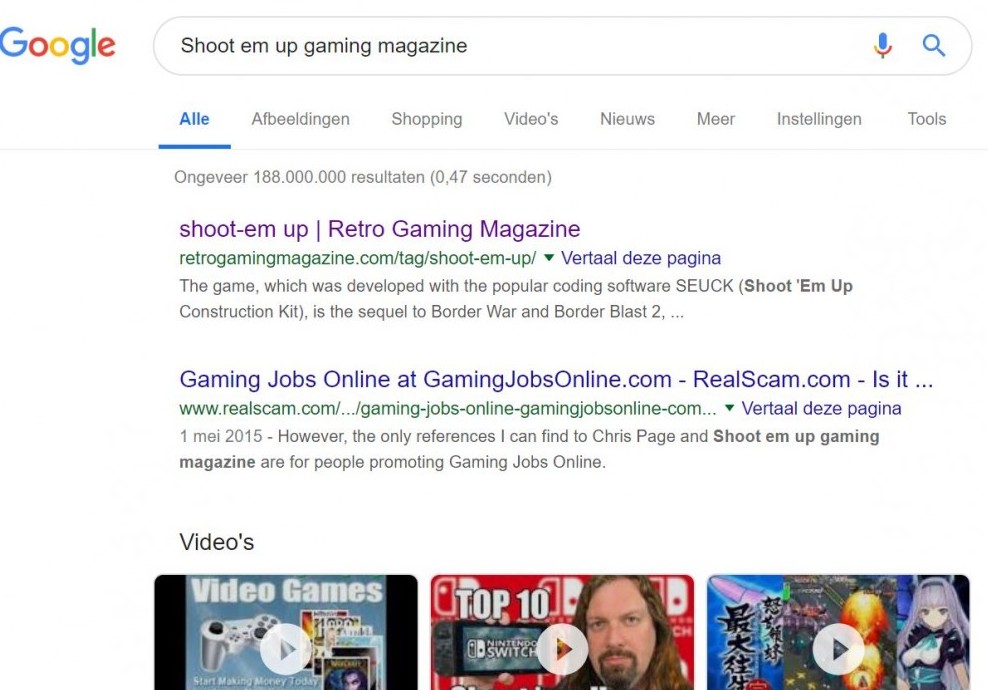 All I found were reviews about that Gaming Jobs Online was a scam or the same website but in different languages. One of them btw said his name was Chris Safya instead of Page.

I can say with certainty that this testimonial is fake.

I went to a website called Sitejabber to look at what other people were saying about Gaming Jobs Online because I think it’s important that you have the opinion of multiple people so you can make a decision based on objectivity.

These are the statistics of the reviews overall: 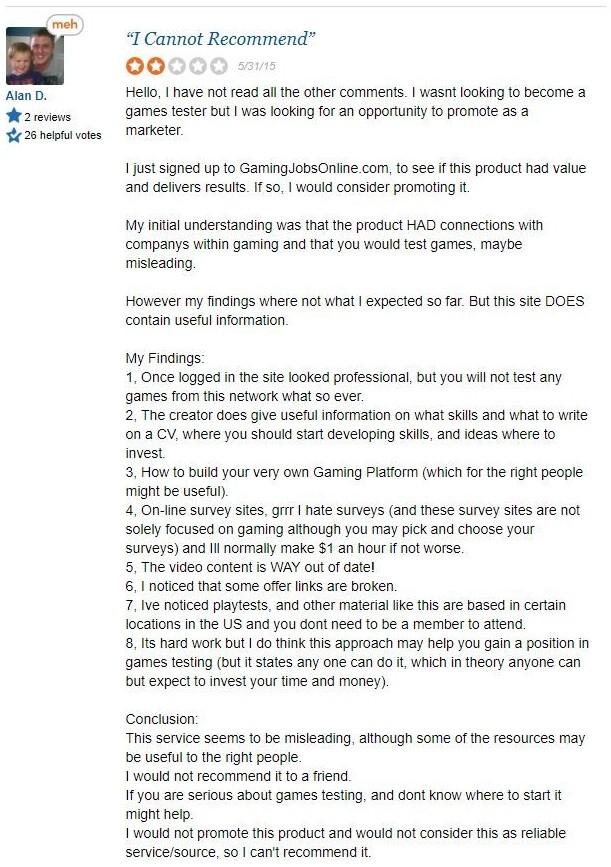 I’ve seen a lot more websites and the reviews are definitely a mixed bag. Most of the reviews say that Gaming Jobs Online is a scam others say they have made money with it and think it’s okay.

A recurring theme in the review is that the people that have made money on Gaming Jobs Online didn’t do it by testing games. Most of them made money with filling out surveys and they weren’t getting paid $75 for each survey.

Multiple people have also said there’s very basic and dated content about how to become a game tester but they won’t actually connect you with the companies that produce these games.

One of the perks of knowing a lot of people in the website review business is that you can ask them about products they’ve tested and luckily I found someone who actually purchased a membership for Gaming Jobs Online.

He basically said you can make money on Inside Gaming Jobs Online or at least you could.

A lot of the games and the services that used to work don’t work anymore. There are some you can still use but don’t expect to make a lot of money on Gaming Jobs Online.

He also confirmed that there are video lessons but they’re dated and he can’t imagine anyone in 2019 having an advantage in the game testing industry by learning from these videos because most of the theory you can find for free if you just Google it.

After carefully looking at what Gaming Jobs Online has to offer I can’t say I’d recommend it to people. Calling it a scam is a bit harsh but it definitely doesn’t deliver on its promises.

It just doesn’t live up to what’s advertised

Gaming Jobs Online might not be what it presented itself to but there are other products out there that are legit.

If you want to make money online from anywhere including your own home by making content about what you love I recommend you to look at Wealthy Affiliate.

It’s the platform that taught me how to create an online business revolving around a niche of your choice and make money from it.