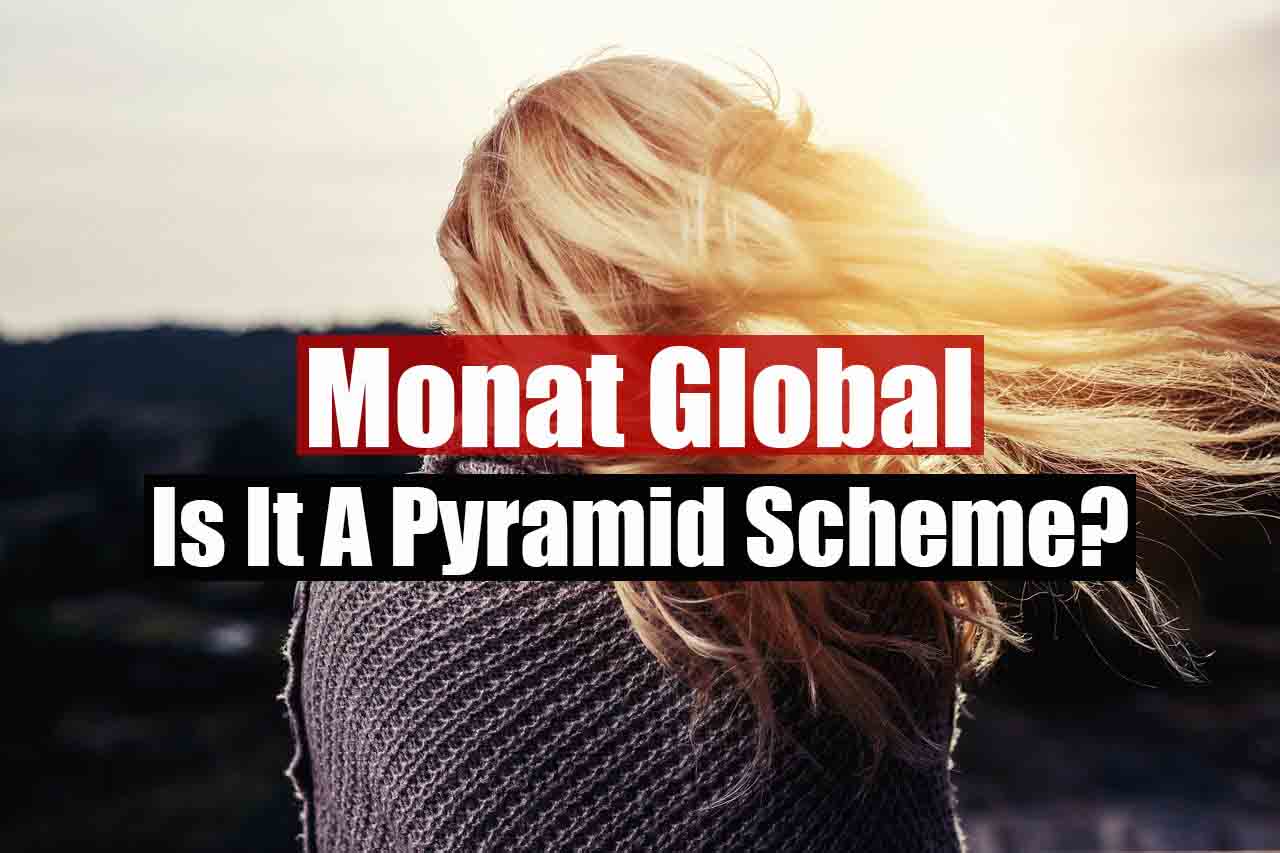 You probably came to this page because you wonder if Monat is a pyramid scheme or a legit opportunity.

Some turned out to be fake other were legit ways to make money online but in the process I learned how to spot scams.

In this post, I’ll show you absolutely everything you need to know about Monat Global and after reading it you’ll know exactly if you should give it a chance.

Summary:
Monat Global is an MLM company that sells Hair and anti-Aging products. The company was founded by Rayner Urdaneta and his son Luis Urdaneta in 2014.

Monat has been in a lot of lawsuits and controversies that have made the news. These lawsuits were the result of people having hair loss after trying out their products.

The structure they use for selling their products is similar to that of a pyramid scheme leading to a lot of accusations.

After doing a lot of research, I concluded that Monat Global isn’t a pyramid scheme.

This doesn’t mean Monat is worth your time.

Read the rest of my post to find out what I exactly mean by that.

Similar to: Younique, It Works!
Rating: 3/10
Recommended: No, unless you’re extremely talented at selling products and recruiting people.

What is Monat Global?

Monat Global is an MLM company founded by Rayner Urdaneta and his son Luis Urdaneta in 2014.  According to its website, Monat Globals mission is:

“…to help people everywhere enjoy beautiful, healthy, fulfilling lives through our exceptional, naturally based products, a fun, and rewarding business opportunity, and a culture of family, service, and gratitude…”

They do this by selling hair and anti-aging products.

Monat has won multiple awards such as:

When you Google some of their achievements it looks really impressive but Monat Global also has another side to them.

From here on out I’m going to show you both sides and answer the question is this is a pyramid scam by comparing it to the official definition of a pyramid scheme.

How to get started with Monat Global?

To make money with Monat Global you’ll have to become a Market Partner. You can do this by following this simple 3-step process.

2. Resell Products
Purchase Monat products and sell them to others.

3. Earn A Commission
Earn a commission based on how many products you have sold.

How much does it cost to join Monat Global?

Like many other MLM companies, you have to make a financial investment to join and become a partner.

Every partner is obligated to buy the starters kit the moment they sign-up on the official Monat website.

This starters kit has all kinds of samples that you can sell or tryout to see what their products are all about.

You’ll immediately be encouraged to buy one of the other packs which you’ll ultimately need to sell to start making money.

Below I have created a list with all the packs so you can get an idea of how much money is needed when you join Monat Global.

So at the least, you’ll be spending $298 when joining Monat Global in the US.

A lot of other countries even charge up till $400 just for joining.

There is also an annual fee of $18 that you’ll have to pay to stay a market partner.

Monat’s biggest focus aside from recruiting lies in selling their anti-aging line and hair products.

Their biggest products are from the rejuvenique product line which are anti-aging products that help with rejuvenating your skin and your hair.

It was kind of hard to find honest product reviews about this line because most on the internet are made by Market Partners that seem a bit too “enthusiastic”.

When I started to look at some more stories about Monat products ran into this:

Monat Global complaints made the news
There are a lot of stories of people that have been using their products and had no complaints the first few months but had their hair falling out after those initial months.

If you go to there website you’ll see that they don’t showcase any of the previous reviews either. 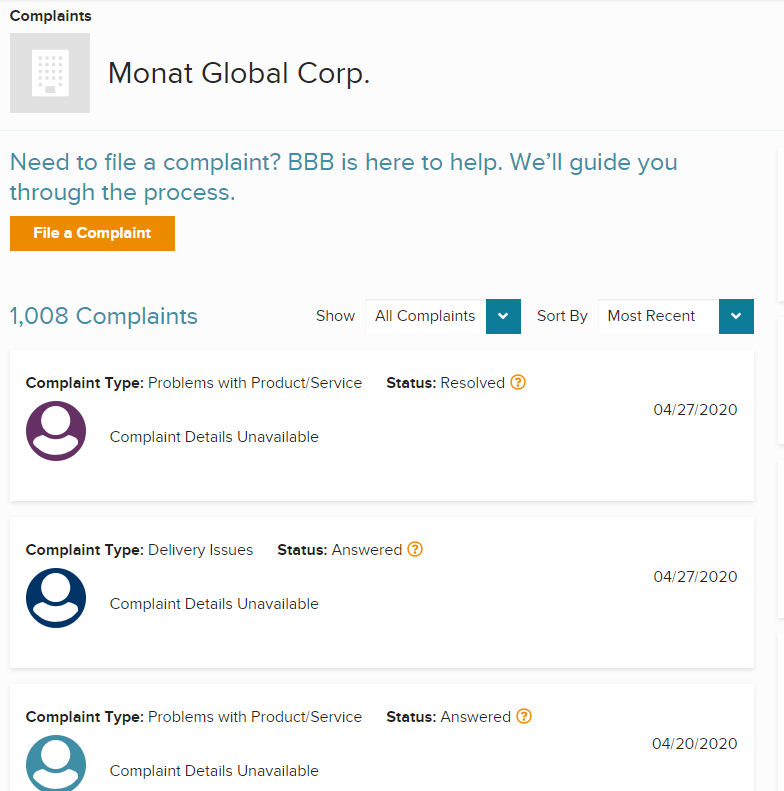 This is logical because the FDA website says the FDA isn’t in the business of approving cosmetic products.

This has caused a lot of problems in the past but seeing they’re still open for business I assume they’ve fixed those problems.

After doing my research about the products it’s hard to call their product line legit.

I wouldn’t be comfortable reselling products that I have doubts over.

How much you can earn with Monat depends on your rank.

You start as what is called a Market Partner and based on how many products you sell, people you recruit, and the performance of your recruits you’ll get into the higher ranks which will allow you to earn more money.

As a market partner, you receive a commission of 30% on sales from retail customers and earn 15% on VIP customers.

Even though Market Partner is the lowest rank to remain a Market Partner and be eligible for your commission you have to sell a Personal Value of 200 a month.

The compensation plan of Monat has changed a lot the past few years but here’s the newest version I could find on their website.

Here's the compensation plan from February 2019.

As you can see the compensation plan is a lot more complex than it needs to be.

It gives me the feeling that they’re trying to make you do everything humanly possible so that the chances of you getting paid are as small as possible.

I have talked about the compensation plan and how Monat pays their Market Partners but what does that mean for you? How much can you earn personally?

Before answering that, let’s start with the question do they even payout after you met the requirements?

I have seen a lot of videos of people that show proof of making money but its hard to know who to trust because people are trying to recruit people for their downline.

This is why I started to look at reviews of people that quit Monat and their experience with it.

Here’s an example that kind of summarizes what a lot of people are saying about Monat Global.

It's a video of an ex-member explaining her experiences with Monat Global and how much she earned durng her time as an member.

It is possible to make money with Monat Global but there are things you have to think about before joining.

Most people that get into MLM will make no money or lose it.

Is Monat A Pyramid Scheme?

What is the definition of a pyramid scheme?

Here’s one of the definitions of a pyramid scheme given by Merriam-Webster:

Monat Global identifies itself as an MLM business (which is Legal).

According to the Balancesmb, the difference between an MLM and a Pyramid scheme is that a P.S. only focuses on recruiting people while an MLM has an actual product they’re focused on selling.

Judging from that definition and the difference between an MLM and a Pyramid Scheme, let’s look at what we found out.

This seems very shady but it has been proven that even though the system is set-up for you to fail you can still make money by selling products that exist.

This is what the organization promised.

Just because of that small posibility to make money Monat Global isn’t considered a Pyramid Scheme and makes it a legal business endeavor.

Monat Global isn’t a pyramid scheme but that doesn’t mean it’s worth your time.

It has been proven that 74% of people that join MLM companies either lose money or don’t make money at all.

Here’s an infographic designed with statistics from the Aarp that show your chances of making money with MLM.

Is Multilevel Marketing for you? AARP Foundation launches a consumer education campaign to reveal the risks and rewards of multileval marketing.

Let’s say you’re part of the small percentage that has a large audience and might have a chance to make money with Monat Global, are you comfortable selling overpriced products that have shown to be of very low quality?

Seeing how Monat works, I can’t recommend anyone to join this program.

You can try it out but I think investing time in something that statistically sets you up to fail is just not worth it.

I do think they had the right idea when it comes to earning through commission because you don’t have to spend time and energy creating products or doing customer service.

Do you have any experiences with Monat Global or other MLM companies I'd love to hear about them.

Also, If you have any questions or you just want to show some love don’t hesitate to leave a comment.