Welcome to my Poll Pay review.

You probably came to this page because you wonder if Poll Pay is legit or a scam.

Over the last year, I’ve been busy creating reviews about all kinds of online products. Some turned out to be fake other were legit ways to make money online but in the process I learned how to spot scams. Poll Pay is one the products I reviewed.

In this post, I’ll show you absolutely everything you need to know about Poll Pay and after reading it you’ll know exactly if you should give it a chance.

Poll Pay is a mobile app that provides its users with surveys they can complete in exchange for money.

The app is available for both iOS and Android. It is possible to earn money with Poll Pay but I wouldn’t recommend it to people looking for a method to make a full-time income online

I do think there’s some value in Poll Pay. If you’re looking for a way to earn 5 dollars now and then than you can benefit from filling out surveys on Poll Pay.

The only real problem I have with Poll Pay is that after qualifying for surveys they sometimes don’t work which means you have wasted time going through the qualification process.

Recommended: For full-time income, no.

>> Learn How To Make A Full-Time Income Online <<
Quick Navigation
Poll Pay Review Overview
The Founder of Poll Pay
How does Poll Pay work?
Who can benefit from Poll Pay
Pros and Cons
My Personal Take
Verdict
Is Poll Pay Worth The Time?
Alternatives

The Founder of Poll Pay

You can learn a lot about a business by looking at the track record of the founder this is why I tried to do some research into who created Poll Play. I started with LinkedIn but I found nothing significant when it came to the founder Poll Pay. 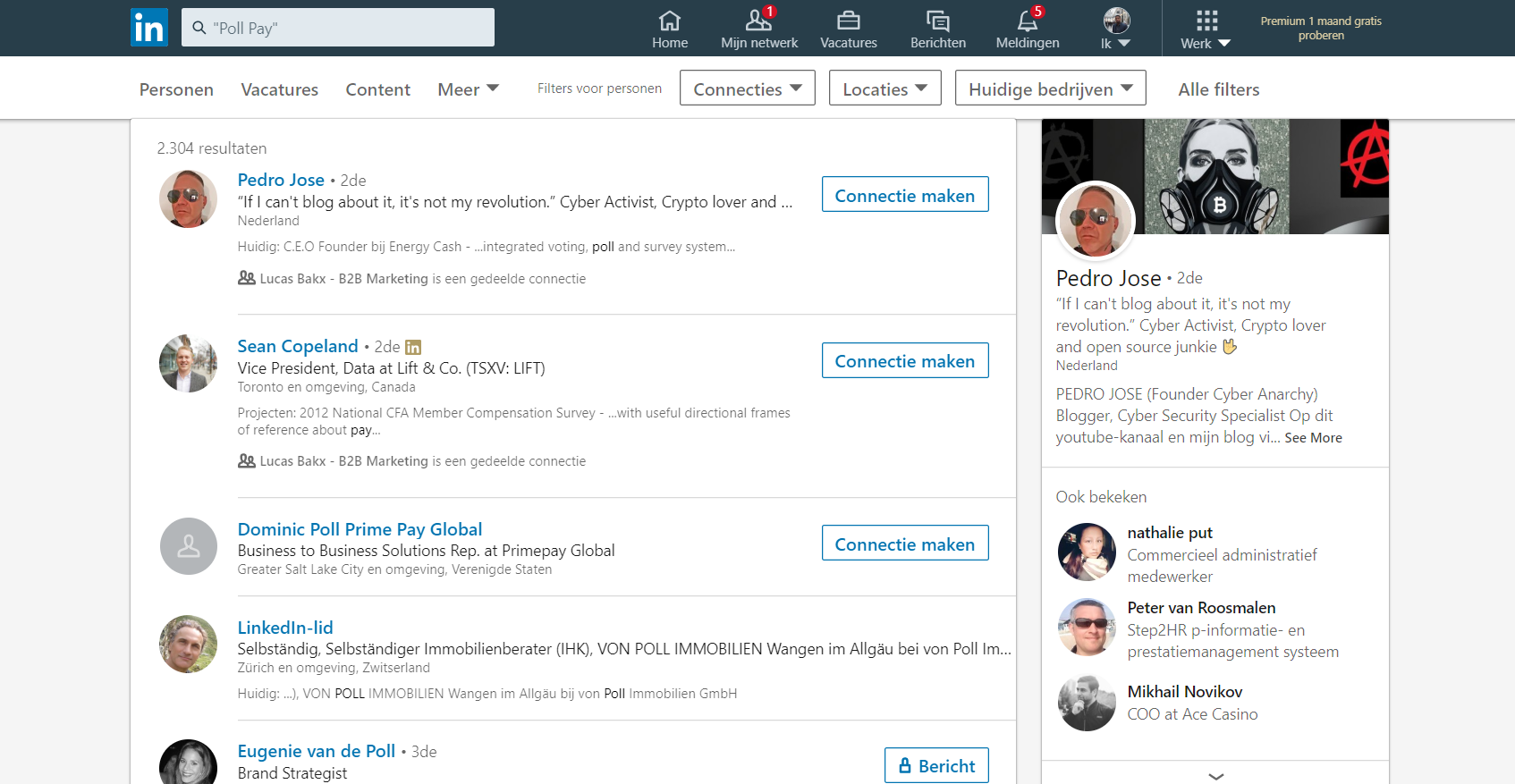 I did find a Facebook Page dedicated to Poll Pay. Their community on Facebook isn’t huge but their posts do get some engagement. More than 1600 people have liked the Poll Pay Facebook page and almost 1900 people are following it. 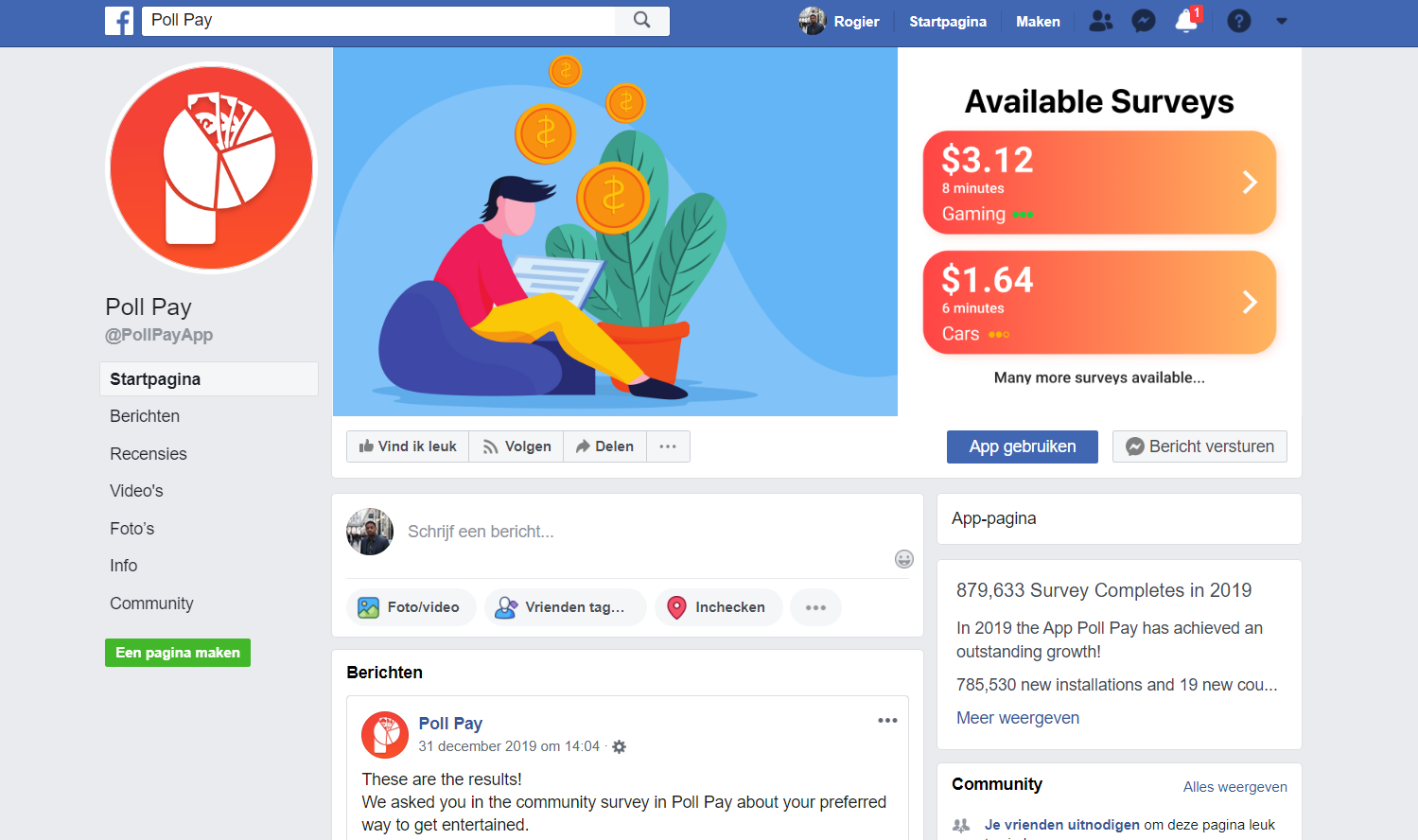 I have also tried Instagram and just Googling it but I couldn’t find anything more than that the app itself was developed by Bitburst a company that has been developing mobile apps since 2015.

Bitburst has a good track record. A lot of Apps on Google Play have been developed by Bitburst.

How does Poll Pay work?

Poll Pay not to be mistaken with the website pollpay.co.uk is a mobile app on which you can get money and rewards in exchange for completing surveys. The surveys take a max of 15 minutes and always consist of short and simple questions.

Almost anybody can join Poll Pay by following this 4-step process: 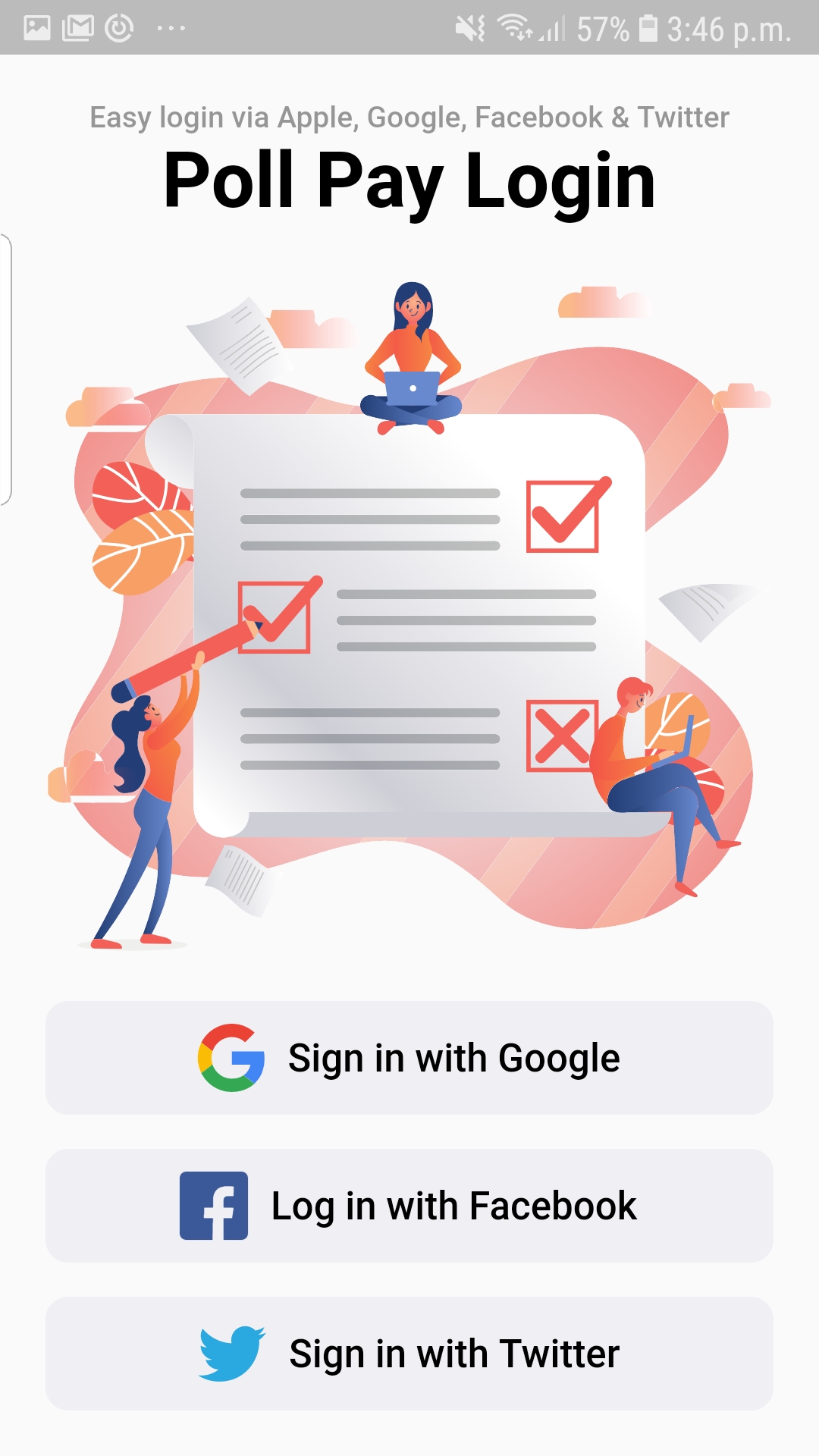 The Poll Pay app has both an iOS and Android version that you can download in the Apple Store and on Google Play.

From what I have seen it's not possible to become a Poll Pay member without some form of:

2. Answer Question to Qualify for form 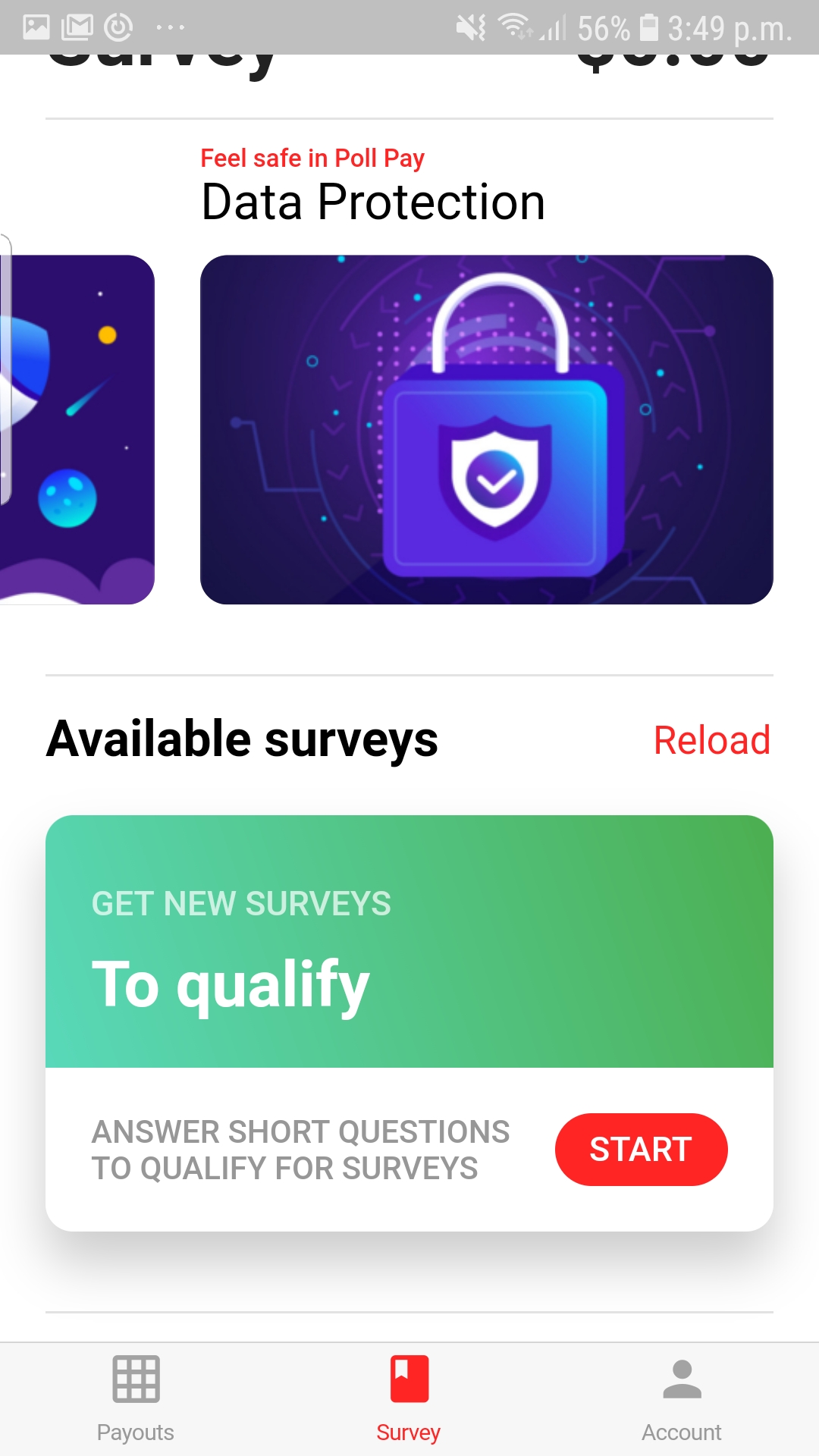 The answers to the surveys are going to be used for research which means it’s important that the right people participate in the surveys.

This is why before every survey there’s a qualification process in which you have to answer a few simple questions often regarding: 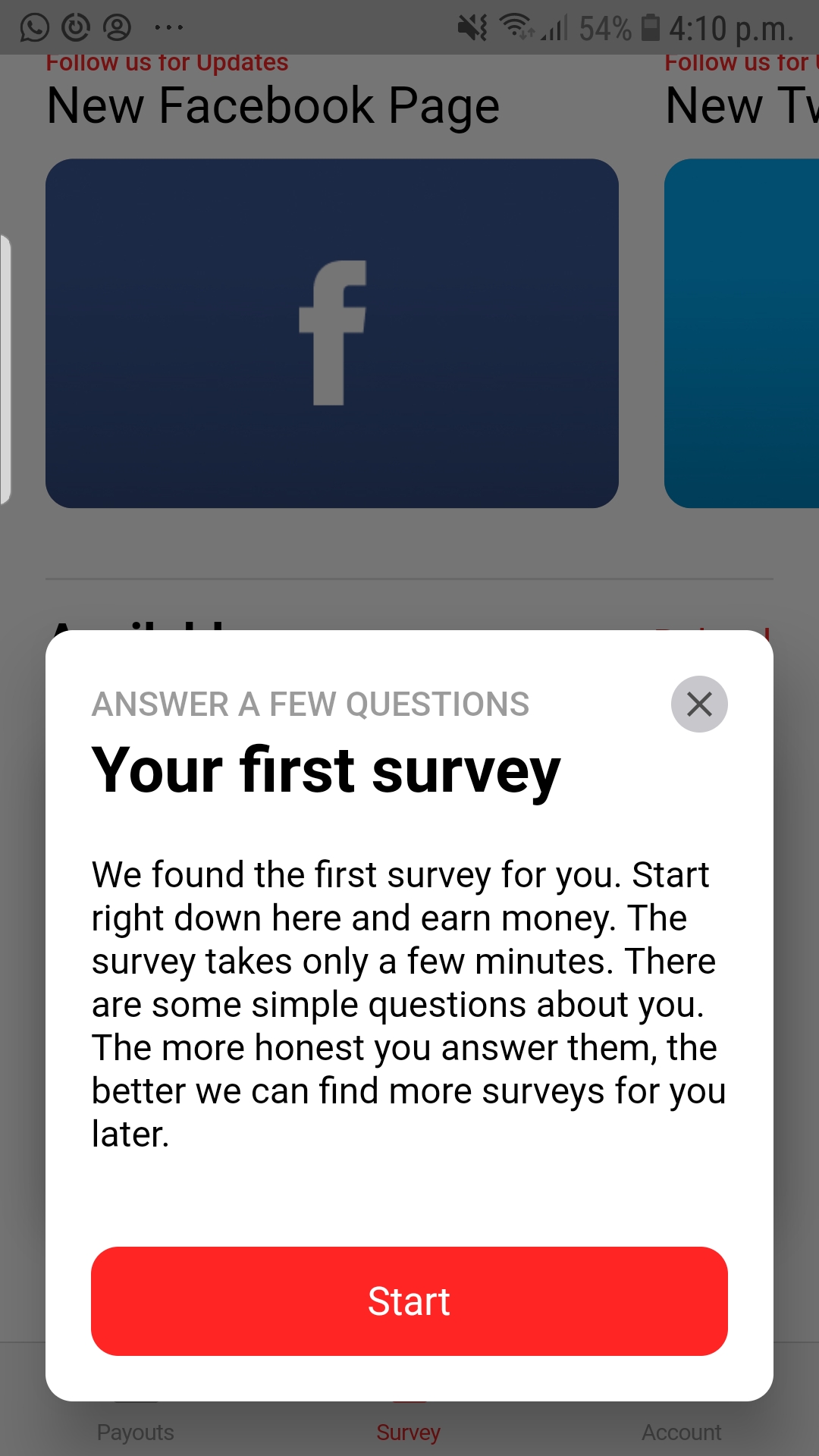 The moment you become eligible you’ll be directed to a survey immediately.

These surveys like I said before can take up to 1 minute to complete.

Luckily, you’ll get an indication of the average time it takes to complete the survey beforehand.

From what I have seen on the Poll Pay Facebook page they might add other activities to get paid for in the future. 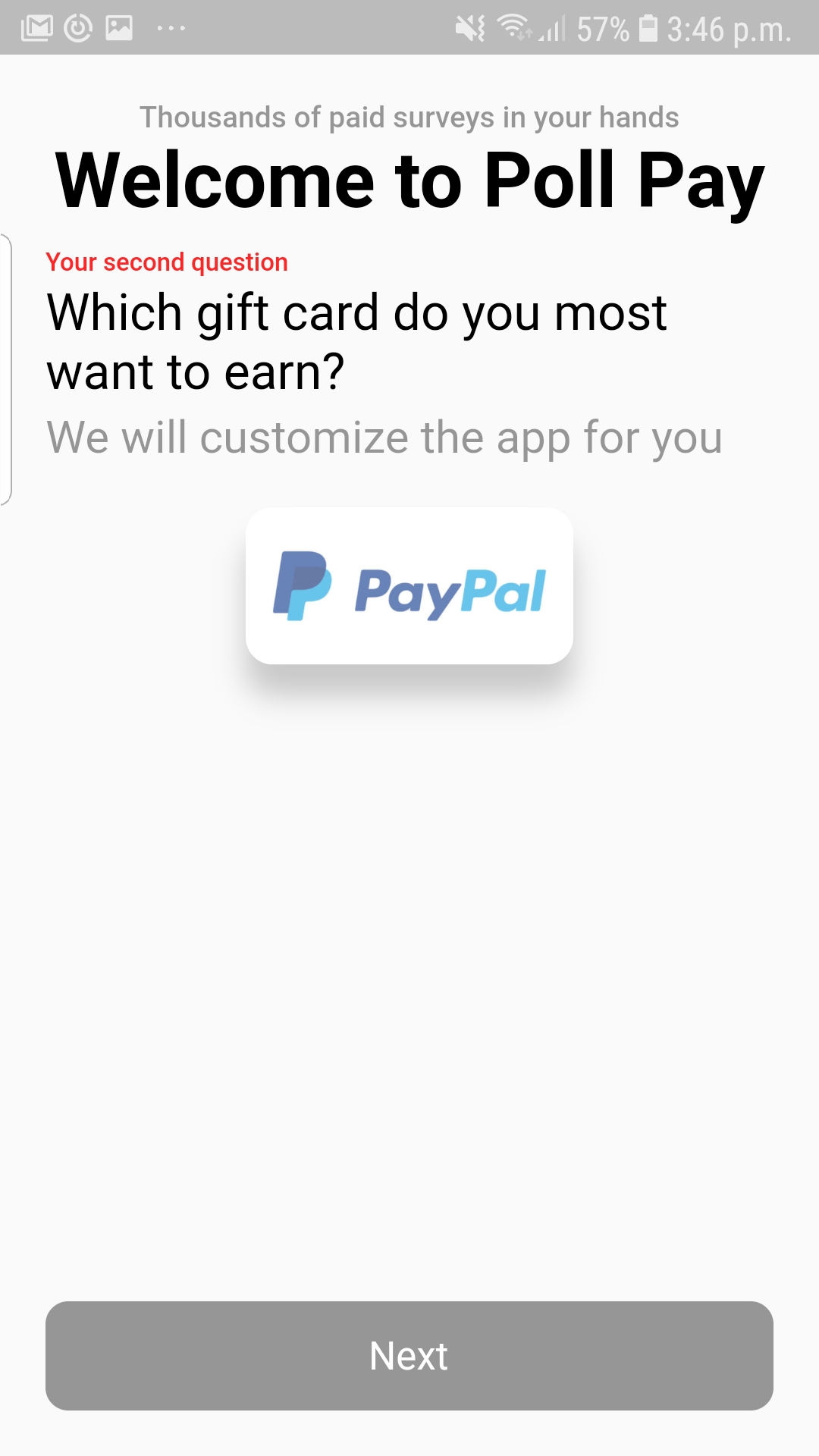 Dependant on which country you’re in you can receive rewards for the credit you earn with Poll Pay.

Poll Pay will ask you what kind of gift cards you'd like to earn the most.

In the Netherlands, you can only be paid out through Paypal but from what I heard other countries have more options to choose from.

What rewards are on Poll Pay?

Poll Pay is at the moment available in 19 different countries and depending on in which country you’re located you can get certain rewards. Poll Pay gives out rewards from Amazon, Google Play, Spotify, and Zalando and other countries or they pay you money through Paypal.

In the country where I’m located right now the Netherlands they don’t offer any gift cards but it is possible to get money transferred to your bank account through PayPal.

How To Earn Money Through Poll Pay Referrals 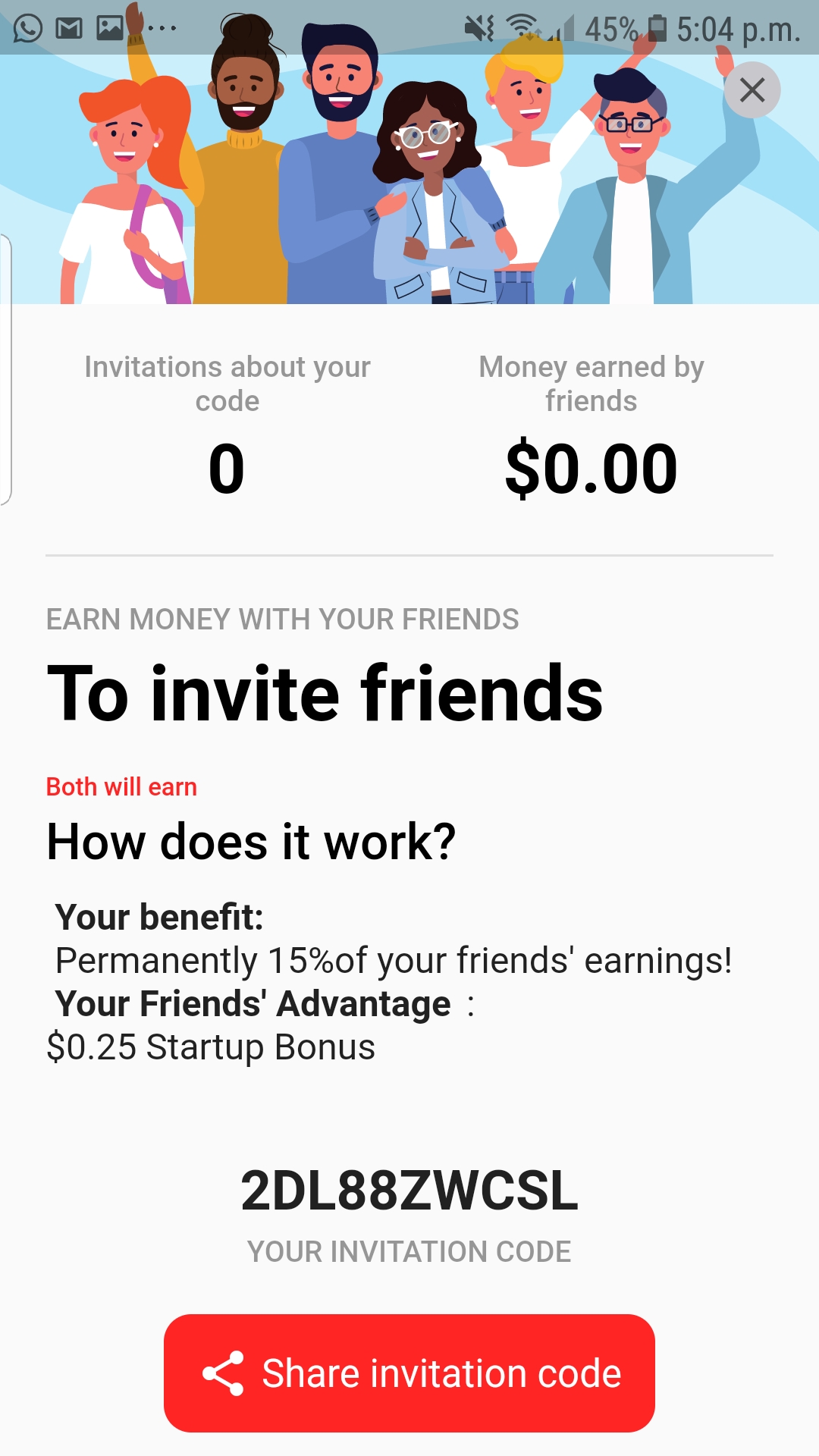 There’s more than one way to make money with Poll Pay. Besides completing surveys you can also make money by referral.

The moment you create an account on Poll Pay you gain the ability to invite friends with an invitation code that is provided to you.

The moment somebody uses your code they get a $0,25 startup bonus before completing even one survey.

The cool thing about these codes is that the moment somebody uses your code and they start filling out surveys you get paid 15% of your friend’s earnings.

This makes it possible to earn money without completing surveys.

Who can benefit from Poll Pay

Who would benefit from Poll Pay:

Poll Pay is a website where you can make money and there are a few things that I like about Poll Pay such as:

There are also parts of Poll Pay that I don’t like such as:

I don’t think Poll Pay is worth the time when there are other options out there to make money with.

Is Poll Pay Worth The Time?

After doing extensive research I've come to the conclusion that Poll Pay isn't worth the time.

In my opinion, you'd have to spend too much time on the app to make decent money. I do think the earning potential is higher than most "make money with survey" apps.

While Poll Pay isn't a scam I can imagine some people might want to make more than pocket money.

Let me show you the basics of starting a +$100/day niche website with my FREE 7-day email starters course.

In this step-by-step starters course, you’ll learn how to create a simple affiliate marketing blog website (in a niche of your choice).

Most people don’t know this but 1 blog post can bring in thousands of visitors monthly for years if done in the right way.

It takes a while to get started but the moment its all set-up its the closest thing to earning passive income online.

learn more by clicking on the button.

That’s all for today. If you have any questions or
you just want to show some love don’t hesitate to leave a comment.