Welcome to my Sharecash.co review.

You probably came to this page because you wonder if Sharecash.co is legit or a scam?

No need to worry you’re in the right place for the answers to these questions.

In this post, I’ll show you absolutely everything you need to know about Sharecash and after reading it you’ll know exactly if you should give it a chance. 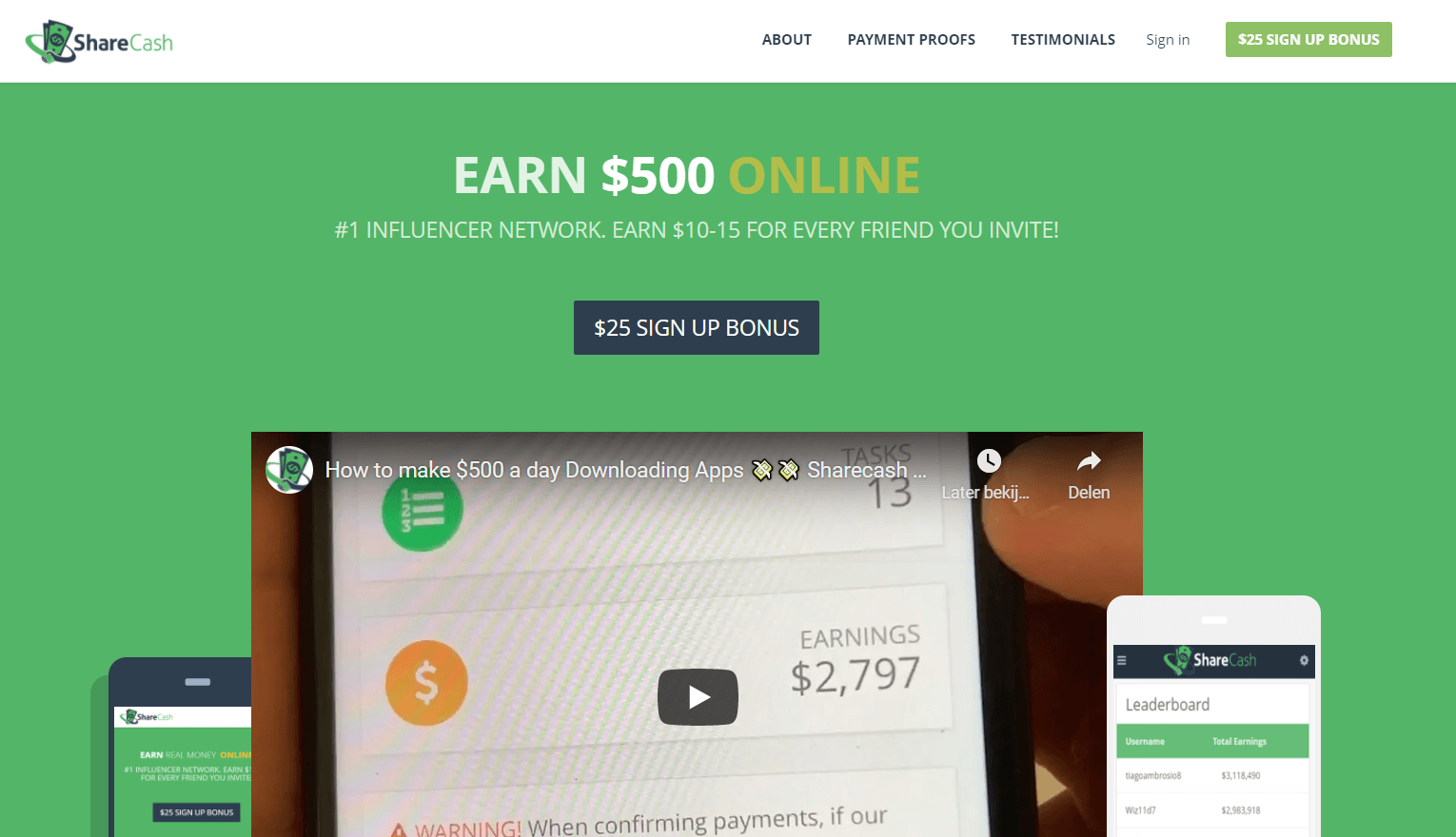 Summary:
Sharecash.co is one of a ring of websites all created by the same people that claim to make it possible to earn money online simply by sharing a social media link.

According to their website, they’re the #1 influencer earning network but this couldn’t be further from the truth. In reality, Sharecash is a website that worries me.

Read the review to find out why I think that is the case.
Similar to: Bonusjunkies, Social Bounty, and Next Cash

>> Click Here For A Legit Way To Make Money Online <<

Sharecash claims to be the #1 influencer earning network. This isn’t the first time I have heard a website say this despite knowing Facebook, YouTube, and Instagram exist and most of the time it spells nothing good.

According to their website, Sharecash was created in 2015 in Amsterdam to serve as a middle man between influencers and advertisers and started to grow exponentially.

While their “about” page says a lot of good things after some research I found out some things that worry me. Below I’ll break down what I found and why I believe you shouldn’t get involved with Sharecash.

While I’d advise you not to get involved, I can understand that people might want to know more about how Sharecash works. This is why included this in the review.

1.Join Sharecash
You can join by filling out the opt-in form on the website. According to the website, at that point, you join a community with thousands of members (but you can’t communicate with any of them). You’ll also receive a $25 bonus just for signing up.

2. Share and Earn
You’ll receive a unique link that you can use to refer people to Sharecash and for each referral, you can earn money.

3.Get Paid
After earning money, you can withdraw it through PayPal, CashApp, Venmo, Bitcoin, or mailed checks.

This is how it should work but after some research and looking at some of the experiences other users have had I noticed this is far from the truth.

In fact, it doesn’t work at all.

What they’ll do is when you try to cash out your earnings tell you, you have to do at least 5 tasks on their offer walls which require you to give up information such as your mobile phone number and more.

The moment you give your mobile phone number you’ll get harassed with texts promoting all kinds of offers that can be very expensive depending on where you’re located in the world.

Aside from the 5 tasks you also have to:

They’ll only tell you this after you invest time and try to cash out your earnings.

Who would benefit from investing time in Sharecash?

I’m not quick to call a website a scam website because I know what kind of consequences it can have for a website. This is why it’s important to showcase some research to back these claims.

What you see below is a summary of all the research I have done and I have listed it as red flags.

I understand that not every business wants to showcase its founder. Some people don’t want to be in the spotlight and scam websites know. This is how they can get away with not showcasing the actual creators and avoid being tracked down after scamming people.

I don’t know who the founders of Nike, Coca-Cola, and Under Armour are but I can easily Google them. This isn’t the case for Sharecash.

When I try to find the founder of Sharecash on Google nothing turns up which is a huge red flag.

The “About” page honestly made me laugh.

It always amazes me how lazy scammers tend to be.

Let me show you what I mean when I say they’re lazy. Here are two screenshots from the Sharecash “About” page. 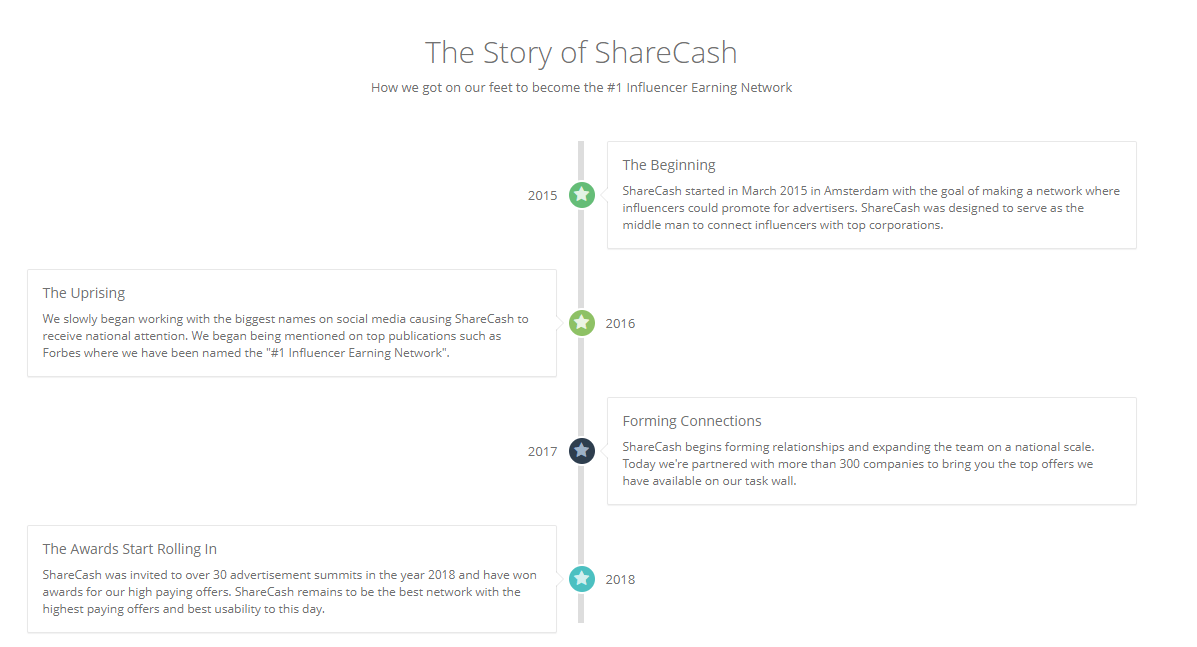 Now take a look at the “about” page of a website named Bonusjunkies of which I did a review last week. They use the exact same copy and design to explain what Bonusjunkies is all about. 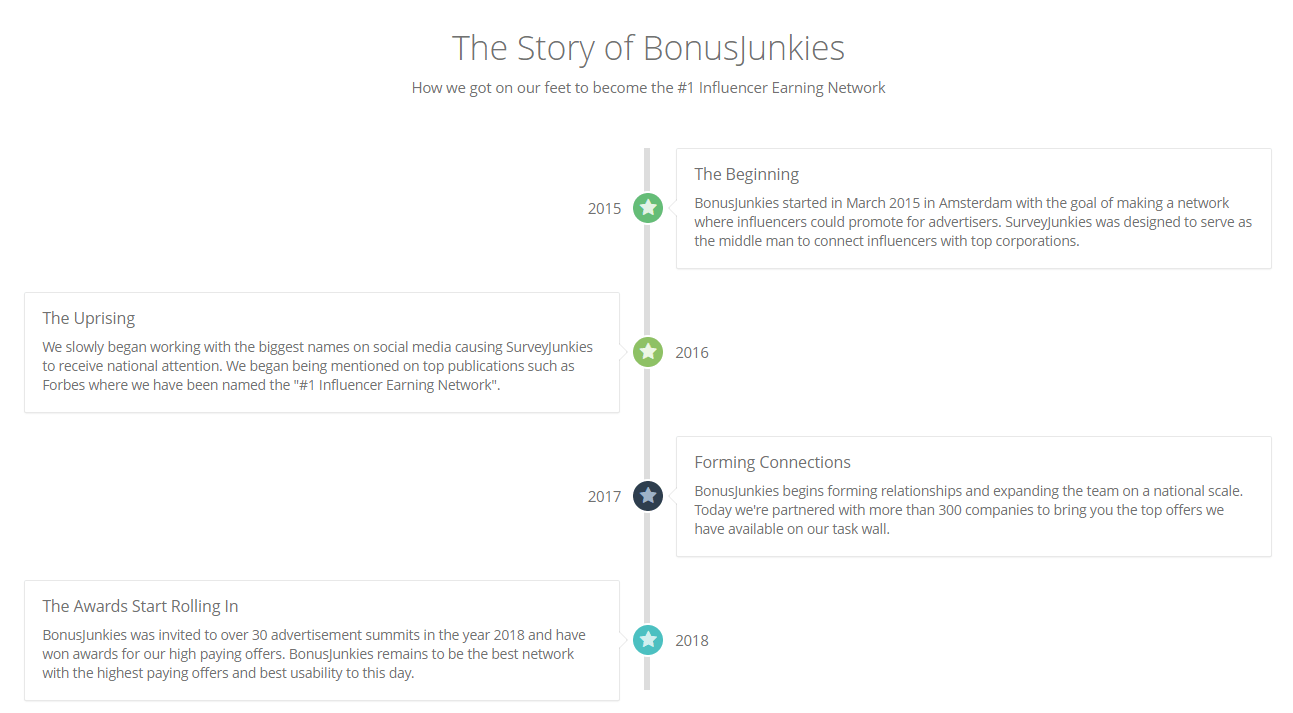 The chance that identical online businesses were created and all went through the same thing at the same time seems highly unlikely to me.

There are at least a dozen other websites with almost the exact same about page which leads me to believe they’re all just clone websites made by the same people.

A good indicator for finding out if something is a scam is by researching the experiences of past users. In the case of Sharecash, this proved to be very valuable. It turns out the majority of people that have come in contact with Sharecash have had bad experiences.

Most of these complaints had to do with never getting paid what was promised and unexpected terms that are only mentioned after trying to cash out your earnings.

Sharecash claims you get $25 just for signing up. If this were really true, this website would’ve gone viral a long time ago. They’re giving away money for free. I don’t think there’s is any successful business that would volunteer to lose money on every sign-up.

Yes, there are some websites that lose money for signing-up but they make up for that by offering upsells the moment you’re an official member.

This doesn’t seem to be the case with Sharecash which makes this a business model that becomes more unsustainable, the more people sign-up.

I consider this to be a huge red flag.

According to the website, just like all the other clone websites, it talks about the business suddenly getting national attention in 2016 and getting mentioned in Forbes an online business magazine that is regarded as an authority website in the business niche.

Unless multiple companies can be named the #1 Influencer Earning Network of the year everything they’re saying is nonsense because other clone websites are saying the exact same thing about being mentioned by Forbes.

If you get mentioned by Forbes you’ll be found on Google very easily because the website has a lot of authority in Google’s eyes and will often be placed on the first page of the search results.

When I Googled Forbes + “Sharecash” I couldn’t find any mention on their website which means this was obviously a lie which also is a red flag.

All I could find were product reviews all saying Sharecash is a scam.

Red flag #6: Payout terms to squeeze information out of you

I have touched on this earlier but to withdraw your money they’re going to ask you to do tasks on their $30 wall. The problem is that to be able to do the tasks they’re going to demand you give your mobile phone number and in some cases ask for all kinds of personal details.

I don’t know any influencer earning network or GPT website that demands you give that information so you can withdraw your money. It just confirms that this is a very sketchy website.

Tired Of Scams? Click Here For A Legit Method To Make Money Online!

How exactly does Sharecash scam you?

If it’s free to join how can it be called a scam?

There are a lot more ways to scam people than taking their money. I’m not 100% sure but I think Sharecash is selling the information of their members. It’d explain why they encourage people to refer more people with ridiculous bonuses they’ll never get.

Companies will pay a lot for information about their potential customers because it makes selling their products easier. Sharecash pressures people to give their information and comes with impossible terms for withdrawing money.

I have noticed I have been getting more spam emails in my inbox after signing up and you get a lot of promotional texts after doing tasks on the offer wall.

This is without a doubt a very sketchy website.

The internet is full of clone websites that have the exact same copy and story such as Bonus Junkies, Next cash, Use2earn, and Tap2earn.

They also make claims that are obviously not true. This in combination with all the user complaints makes me think that this is a scam and that you should stay away from it.

Is Sharecash.co a scam? Yes. It is a scam.

I know it sad to see that Sharecash.co is not the product it claimed to be but that doesn’t mean you are on the wrong path. You can make money by referring people to products but in reality, you’ll only earn money with that if the referral spends money.

It’s called affiliate marketing and if you do it in the right way you can earn a lot of money doing it. Companies such as Amazon, Uber, and eBay all have affiliate programs that you can use to make money.

If you’re interested in learning how to make a full-time income online with affiliate marketing take a look at the FREE step-by-step beginner’s course from Wealthy Affiliate. It’s my highest rated recommendation for making money online.

If you have any questions, comments or concerns leave them in the comments and I’ll reply a.s.a.p.